Zachary Edward Snyder (born 1966) is an American film director, producer, and screenwriter. He made his feature film debut in 2004 with Dawn of the Dead, a remake of the 1978 horror film of the same name. Since then, he has directed or produced a number of comic book and superhero films, including 300 (2006) and Watchmen (2009), as well as the Superman film that started the DC Extended Universe, Man of Steel (2013), and its follow-ups, Batman v Superman: Dawn of Justice (2016) and Justice League (2017). A director's cut for Justice League was released in 2021. He also directed the computer-animated film Legend of the Guardians: The Owls of Ga'Hoole (2010), the psychological action film Sucker Punch (2011), and the zombie heist film Army of the Dead (2021).

In 2004, he founded the production company The Stone Quarry (formerly known as Cruel and Unusual Films) alongside his wife Deborah Snyder and producing partner Wesley Coller.

Snyder was born in Green Bay, Wisconsin, and raised in Riverside, Connecticut. His mother, Marsha Manley (née Reeves; d. 2010), was a painter and a photography teacher at Daycroft School, which Snyder later attended. His father, Charles Edward "Ed" Snyder, worked as an executive recruiter. He has an older sister, Audrey, and was raised as a Christian Scientist. He also had a brother, Sam, who died when Snyder was a teenager.

Snyder attended Camp Owatonna in Harrison, Maine, during the summer months as a child. Snyder studied painting a year after high school at Heatherley School of Fine Art in England, although he had already begun filmmaking. Afterward, Snyder attended Art Center College of Design in Pasadena, California. He graduated with a BFA in film in 1989.

The production notes for Snyder's first film Dawn of the Dead describes Snyder as "a comic book and horror film enthusiast in his youth".

Snyder made his feature film debut with the remake of the horror film Dawn of the Dead (2004) and scored a box office hit with the fantasy war film 300 (2006), adapted from writer-artist Frank Miller's Dark Horse Comics miniseries of the same name. His Warner Bros. film Watchmen was released on March 6, 2009 and grossed $185 million worldwide. His follow-up project/animation debut, Legend of the Guardians: The Owls of Ga'Hoole, was released on September 24, 2010. Snyder produced, co-wrote, and directed Sucker Punch, which was released on March 25, 2011. The film, based on a script written by Snyder and Steve Shibuya, was about a young woman in a mental hospital who fantasizes about escape with her fellow inmates.

He directed 2013's Man of Steel for Warner Bros., a reboot of the Superman franchise and the jumpstart to the DC Extended Universe (DCEU). He signed on to direct a yet-to-be-produced remake of the 1969 film The Illustrated Man and produced the prequel/sequel to 300, 300: Rise of an Empire (2014). He also wants to direct a segment for an upcoming Heavy Metal 3, and plans to write and direct a sequel to Legend of the Guardians.

During Comic-Con 2013, Snyder announced that Batman and Superman would share the screen in Batman v Superman: Dawn of Justice, released in 2016. Snyder directed, Cavill reprised his role as Superman, and Ben Affleck played Batman. Snyder directed Warner Bros.' 2017 Justice League, but he exited during post-production to deal with the death of his daughter, Autumn Snyder. His replacement was Joss Whedon.

As of March 2016, Snyder was working on Horse Latitudes, formerly known as The Last Photograph, a drama about a war photographer in South America.

He was also working on an adaptation of the 1943 novel The Fountainhead by Ayn Rand, but confirmed he had abandoned it in 2021.

He has also expressed an interest in making a film, in the style of 300, about George Washington, the first President of the United States of America.

On January 29, 2019, Snyder announced that he has signed on to helm Army of the Dead, a zombie heist thriller, for Netflix. Snyder will direct and produce with his partner and wife, Deborah Snyder, via their newly rebranded production company, The Stone Quarry.

On May 20, 2020, Snyder announced that Zack Snyder's Justice League would be released on the streaming service HBO Max in 2021.

Snyder will produce an anime-style web series inspired by Norse mythology for Netflix.

Snyder often uses slow motion, particularly the technique of speed ramping, in and out of the fight scenes in his films, differing from other directors who make multiple cuts and close-ups during a fight. A minute-|long shot| from 300 shows King Leonidas slaughtering his enemies, the camera zooming in and out to emphasize each kill and move Leonidas makes. By combining these two techniques, he reduces the need for excessive cutaways and keeps the viewer oriented during fight scenes.

Snyder said "There are other superhero movies where they joke about how basically no one's getting hurt. That's not us. What is that message? That it's okay that there's this massive destruction with zero consequence for anyone? That's what Watchmen was about in a lot of ways too. There was a scene, that scene where Dan and Laurie get mugged. They beat up the criminals. I was like the first guy, I want to show his arm get broken. I want a compound fracture. I don't want it to be clean. I want you to go, 'Oh my God, I guess you're right. If you just beat up a guy in an alley he's not going to just be lying on the ground. It's going to be messy'."

Having directed numerous films based on graphic novels and comic books including 300, Watchmen, and his films in the DC Extended Universe, Snyder puts a big emphasis on using storyboards to assist in visualizing his shots in the films, taking inspiration from actual panels from the source material. He also intentionally chooses color palettes that, as StudioBinder describes, create "not-quite-real worlds filled with zombies, superheroes, and warriors."

The Netflix production Army of the Dead was a special project for Snyder as he served as his own cinematographer, as well as this being his first film shot digitally.

Snyder has been described as one of the most polarizing directors of modern cinema. David Ehrlich of IndieWire wrote that Snyder's "name alone is enough to launch a thousand angry tweets, and the most passionate writing about his work is exclusively found in the comment sections of websites like this one. Snyder's critics really seem to hate him, and Snyder's fans really seem to hate his critics ... Is Snyder a master or a hack? A misunderstood myth-maker, or a meathead with a movie camera?"

Snyder lives in Pasadena with his second wife, producer Deborah Johnson. The couple first met in 1996, began dating in 2002, and married on September 25, 2004, at St. Bartholomew's Episcopal Church in Manhattan, New York. He was previously married to Denise Weber.

On March 12, 2017, the suicide of his daughter Autumn prompted Snyder to withdraw from post-production work on Justice League in May 2017 to be with his family, which resulted in Warner Bros and Joss Whedon completing the film.

Snyder became a fitness enthusiast during the filming of 300 and has a gym in his home in Pasadena. Snyder has also encouraged his cast and crew to work out during productions on his films starting with Watchmen. 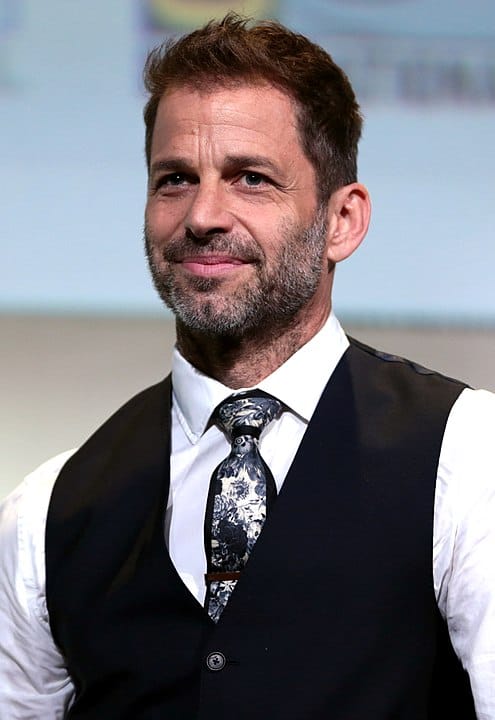