Zhang Yuan (born 1963) is a Chinese film director. He's been described by film scholars as a pioneering member of China's Sixth Generation of filmmakers. He and his films have won ten awards out of seventeen nominations received at international film festivals.

Born in Nanjing, the capital of Jiangsu Province, Zhang received a BA in cinematography from the Beijing Film Academy in 1989. Having initially emerged onto the film scene shortly after the Tiananmen Square protests of 1989, he is frequently referenced as an exemplar of the pioneers who are grouped into the loosely defined Sixth Generation. Despite a diploma from the prestigious Film Academy, Zhang decided to eschew his assigned position within the People's Liberation Army-connected August First Film Studio, choosing instead to produce his films independently. As a fledgling filmmaker, he chose to shoot in a documentary style and has referred to these early films (Mama, Sons, and Beijing Bastards) as "documentary feature films."

Aside from some original short subjects, he directed as a student filmmaker, the official debut of his career in 1990 is Mama, a semi-documentary account of a mother and her retarded son, which is considered to have a historical spot as one of the first features of the Sixth Generation movement and as China's "first independent film since 1949". His next film, 1993's Beijing Bastards follows Beijing's disaffected youth subculture and another title, Sons, in the same manner as Mama, blends the line between fiction and documentary film, as the actors, playing themselves, recreate the actual destruction of their family due to alcoholism and mental illness. However, the transgressive nature of these films (which depicted Chinese youth and society in harsh and unflattering imagery and terms), quickly came to the attention of the Chinese authorities. By April 1994, the Ministry of Film, Television and Culture issued a statement banning Zhang from filmmaking. Also banned were fellow Sixth-Generation directors He Jianjun, Wang Xiaoshuai, the documentary filmmaker Wu Wenguang, Fifth Generation director Tian Zhuangzhuang, and Zhang's wife, screenwriter Ning Dai, whose sister, director Ning Ying, is a transitional figure between the Fifth and Sixth Generation. In 1996, two years after the ban went into force, Zhang was ready to present his next and most controversial, work, the surreptitiously filmed East Palace, West Palace, also known as Behind the Forbidden City, China's first feature with homosexual characters and, furthermore, their persecution by the police. A print was secretly taken out of China and screened at the 1997 Cannes Film Festival.

After East Palace, West Palace, Zhang's style began to shift away from documentary-like neo-realist dramas to more conventionally filmed features. 1999's Seventeen Years, a family drama and also the first Chinese film with approval to shoot inside a Chinese prison, nevertheless proved a significant international success winning the Best Director award at the Venice Film Festival. 2002–2003 continued to see Zhang approaching more commercially viable works as well as his most prolific period yet, directing three films in the course of a year. The cinematic version of the Communist opera Jiang Jie, the celebrity-helmed romantic mystery Green Tea, and the romantic drama I Love You were successful if a far cry from his earlier "underground" works. In 2006, he directed Little Red Flowers, based on writer and Chinese cultural icon Wang Shuo's semi-autobiographical novel It Could Be Beautiful. The film garnered a CICAE award at the 2006 Berlin Film Festival.

Between his feature film efforts, Zhang strives to continue producing long-form documentaries. 1994's The Square documents daily life in Tiananmen Square, in the immediate years following the events of the 1989 Democracy demonstrations. The surreptitious shoot took the guise of a program production crew for China Central Television (CCTV).

The late 1990s, meanwhile, saw Zhang indulging again in his interest in documentary form with Demolition and Relocation in 1998, an account of the destruction of Beijing's Hutongs. In 1999, Zhang made Crazy English, which followed Crazy English-founder and motivational speaker Li Yang in a film Zhang himself described as a cross between Triumph of the Will and Forrest Gump. 2000's Miss Jin Xing, meanwhile, follows Zhang's interest in society's marginalized with a touching portrait of China's most famed transgender individual, Jin Xing, who in 1996 came out as a trans woman. Jin's story is told through a series of interviews with those who know her as well as with Jin herself.

Besides films, Zhang has also directed numerous music videos and commercials. His most fruitful collaboration was with Chinese musician Cui Jian, resulting in several music videos, including the winner of the Best Asian Video, Wild in the Snow, at the 1991 MTV Music Video Awards. In 2000 he was a member of the jury at the 22nd Moscow International Film Festival. 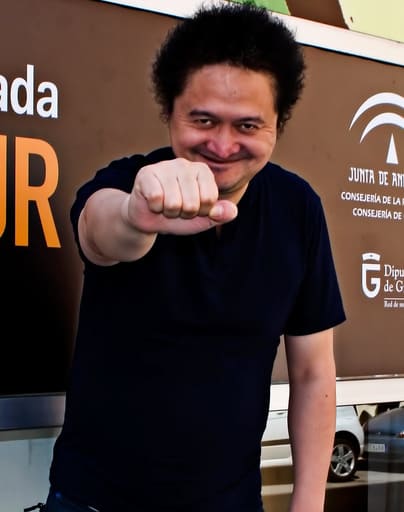